Dear Governor Cuomo: Won't you be an environmental Santa, too? 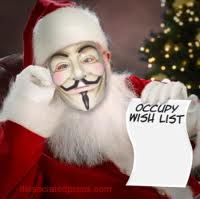 This morning I read Bill McKibben's article about the environmental Santa Claus, the Mayor of Seattle Mike McGinn, who has vowed to divest the city from fossil fuel investment.

What a lovely gift right before Christmas and New Year's!

I then received a holiday email letter from my very own Governor Cuomo.  Nothing personal, mind you, just the mass mailing to all New Yorkers.

Still, how very nice to hear from him.

I took the opportunity to thank Governor Cuomo for thinking of me and all of us.

So, call me greedy, but I also responded with my Christmas wish list (okay, I'm Jewish/Buddhist, and Santa doesn't come to my house, but I can dream, can't I?).  I'm not asking for gifts under the tree.  I'm asking for clean and safe air, water, food and products--free of toxic chemicals and radiation. I'm asking the Governor to fight climate change. I'm asking for a safe future for all children: a livable planet.

Thanks so much for your holiday letter.

You have an opportunity to do something really meaningful on this holiday.  Like the Mayor of Seattle, you can be an environmental Santa Claus, too.  Yes, you can help change the course of human and planetary history!  Yes, you can save us all!

2) Shut Down Indian Point Nuclear Power Plant (35 miles from NYC) before we have another Fukushima--this time, in a densely populated area of four million people.  Shut it down, please!

3) Divest all NY state funds from fossil fuel investment.  The ice caps are melting, the seas are rising, the weather is crazy.  Save NYC, NY State, and the world!

5) Support the Safe Chemicals Act and institute 'Safe Chemicals' legislation in NY.  Keep the toxins out of our products, air, water, and soil. Our bodies can't handle the burden of more poison.


Amen and thank you from all the children present and future.


Feel free to copy my letter, or write your own.  If you live in a different state, adjust your letter as necessary to the needs of your location. Write to your own Governors and Mayors.  Their job is to protect, us, the citizens of the United States.  We have a right to clean and safe air, water, soil, products, and food.  Remind them!  Remind yourselves! Wouldn't it be nice to have a country full of environmental Santas protecting our safety and health?
Posted by .Ecofeminist and Mothering Ruminations at 6:47 AM 2 comments

A Violent America, or The Hunger Games


The Northeast has suffered a lot this fall.  First there was Sandy, now the Newtown slaughter.  Many died in Sandy, and many continue to suffer from the storm.

This past week, in Connecticut, 27 people died violent deaths.  Twenty of these folks were small children.  It's inconceivable on the one hand, and yet children and innocent people are murdered every day throughout the U.S. Over 10, 000 human beings are killed yearly with handguns.

There have been 61 incidents of mass murder since Columbine in 1999.

I agree with Michael Moore, that the violence is about more than weak gun laws or mental health issues--although clearly both are problematic and I'm all for instating rigid gun regulations, and improving our mental health system.

Like Moore, I think the problem has to do with our culture.  We live in a land of glorified violence and meanness.  Turn on the TV, go to a Hollywood film, play a few internet games, listen closely to our language, and watch how our children do or don't play.  And, let's not forget our investment in wars and violence worldwide; we, the great American protectors, do a lot of killing on this planet.  Notice how much we spend on our weapons--including thousands of nuclear missiles set on hair trigger alert, even though the cold war is over.  We spend far more on the military than on education, the environment, and feeding and caring for the hungry and poor--all put together.

We are a violent nation.

Our culture of violence lives deeply in each and every one of us, and that is why our streets --even in "good" surburban neighborhoods--are empty of children playing.  We are all afraid.

Because of this fear, children have had the play taken out of them and this contributes to the cycle of violence.  We keep them inside, and/or busy with structured activities, because we're afraid for them, and yet, ironically, our children watch hours and hours of violent images on their computers, smart phones, and TVs.  We all know the statistics of how many deaths, rapes, and murders kids see each week on their screens.

Of course, there are the children of less privilege.  Shootings are nothing new to the kids from poorer neighborhoods.  They can't go outside without getting shot, every day, every hour.

No wonder our kids bully each other mercilessly.  And, no wonder the violence keeps escalating.  It's what popular culture represents as normal and acceptable.  Fear and violence are fun(ny) and entertaining.

Check out the popular reality show Dance Moms.  The entire drama centers around mothers and their shared dance teacher screaming at each other.  They have near-physical fights over dance parts for the girls.  The little girls sit quietly and watch their elders battle it out.

What about that other recent favorite --The Hunger Games--where children brutally and elaborately murder each other and only one--the most cleverly violent of all, survives?

I'm not just blaming Hollywood or the media, though.  I'm blaming all of us.

Maybe now, since Newtown and the murder of such young innocents, we'll wake up and work for effective change--legally and ideologically.  Obama and Congress, as well as all American citizens, must not ignore this issue anymore.  There's too much visible blood on everyone's hands.

Senator Richard Blumenthal says this is a "transformative moment."

President Obama says, "this violence must end" and, today, he pledges action.

As Van Jones points out regarding the climate crisis, change has to come from the top (politics and the legal system), the bottom (grassroots activism) and the inside (what I like to think of as the internal heart of our culture). The same goes for our crisis of violence.  We need our politicians to protect us from the weapons with gun laws and the elimination of imperialistic war-mongering.  We need activists to push for this change to happen.  And, the citizens of this nation need a change of attitude: from violence, hostility and anger, to tolerance, peace and love.  This might sound radical.  It is.

In the 1960s, a movement rose up, a movement of peace that drew on the work of Gandhi.  Peaceniks marched to end the Viet Nam war and advocated on behalf of widespread non-violence.  At the end of the war, they fought to eliminate nuclear weapons.  Peaceniks united with the Civil Rights movement to end racial violence as well.  They practiced non-violent methods of protest--if the police attacked them, they went limp.  Remember the famous photograph of the protester putting a flower in the nozzle of a weapon?

Their motto was: "Teach Peace."

They promoted love, tolerance, and understanding.  They said we must talk to each other, lay down our weapons, and learn effective and peaceful communication skills.

Parents stopped buying their children toy weapons.  They wanted to eliminate the idea of violence as acceptable even in play.

These folks stopped the Viet Nam War.  They helped to get rid of the Jim Crow and other racially discriminatory laws.

Isn't it about time we listened to their wisdom?

It's time to talk peace education in our schools, religious institutions and in our homes. It's time to rebuild our towns, cities, and nation, and re-envision what a truly "peaceful and sustainable community" might look like.

A terrific new student-lead peace project is the Teach Peace Initiative.  Get your kids, families, and schools involved in this one!

As David Roberts eloquently says in his piece at Grist about the Newtown massacre, we need to develop personal and cultural "empathy."  We must recognize that the children who were murdered in Newtown are "all of our children."

Ultimately, only when we hold each child on this earth in our hearts will deep and effective peaceful change arise.   In my mind, this also includes the ignored underprivileged children who are violated, raped, and killed every day across the globe.

If all children are all of our children, how can we think of building and selling weapons?  How can we start and fight wars?  How can we allow the poisoning and degradation of the biosphere?

So, as we bury and mourn the loss of these sweet innocents in Newtown, we must make our goal the widespread cultural development of compassion, empathy, and love-- and, finally, peace.

Posted by .Ecofeminist and Mothering Ruminations at 10:38 AM 0 comments

Next door: there are six men with leaf blowers.

Yet every week the men come and blow anyway.

I suppose they need the dollars to feed their families back home, but they're polluting the air and it is so loud.

I want to cry for the earth, but I have no [more] tears.
I want to scream, but I don't.

The grass they walk on is new.

A month ago the men pulled up the old grass and rolled out at a bright green carpet in its place and poured toxic liquid on top so it would be yet brighter.

Now I won't grow vegetables next summer, as the chemicals from next door will seep into my garden.

What is to be done in America?

Posted by .Ecofeminist and Mothering Ruminations at 10:47 AM 2 comments