Time Is Running Out

Field notes from a busy Ecofeminist Mother:
As my sabbatical winds down and there is so much more work to be done on my book and other publications, I feel a bit of panic setting in.  I love teaching, but this work is so important and I have much more to do.  Time is running out.


I am increasingly obsessed with studying nuclear bomb and power history.  I will be interviewing and taping Helen Caldicott and many others.  This is thrilling to me.  I can't wait to speak with her.   I have found many activists who worked with my mother in the 1980s on nuclear freeze.   The information keeps unfolding and the stories are incredible and so important to environmental history.


I am awed by the work of my parents and their many peers and friends and colleagues who worked tirelessly for years in the peace, civil rights, and anti-nuclear movements.  My mother's last bit of volunteer work was for Planned Parenthood.  Doing civil good made my mother happy--even during very difficult times.  I wish more of us could tap into that.   Doing good in the world, giving to others and having a real "cause" enriches one's own life as well as the lives of so many others.   Inspiration comes from caring and doing for  something greater than ourselves.  As Martin Luther King says, "If a man hasn't discovered something that he will die for, he isn't fit to live."


Another bizarre example of American food waste, health, and garbage culture: Yesterday, I was served a vile supposed fruit salad (it had to have been canned 20 years ago) in my daughter's school cafeteria. This nasty stuff was served in a styrofoam container. These fruit containers are automatically put on the kids' trays  and of course the kids just throw them out.   What a waste.  The poison cup goes right into the garbage (better than in their little bodies) and fills up landfills.  What ever happened to the concept of serving a whole piece of (organic) fruit on a reusable plate?  I feel sorry for the many kids eating free lunches who have to eat this foul junk.  What ever happened to really taking care of the children?  And, styrofoam?  Are we still using this polluting non-biodegradable stuff?  On a hopeful note, Berkeley, California chefs are transforming public school meals. I just came across this great piece in Grist: "Healthy Breakfasts Buy Lunch in Berkeley Schools."  You say you want a revolution? Well, you know, we all want to change the world.  Yes I do.


The BP spill is just one more reminder that we need to reduce oil consumption and invest in and develop new clean energy technologies.  Oil, coal, and nuclear are NOT the answer.  As for me, I'm trying to drive less, and I'm saving up for a hybrid.  I'm also considering a radical change in lifestyle-- a move to a sustainable community where my feet and legs are my main source of mobility.


I'm freaked out today.  My poor heart aches for my little one (how long will her mom be here? As a cancer survivor, this thought often crosses my mind).  I curse the barbarousness of cancer treatment.  Last night, I came across this information (again) about radiation exposure and catscans in the article, "President's Cancer Panel: Environmental Cancers 'Grossly Underestimated."   Among other alarming bits of information in this very informative article, it states that,  "Patients who have a chest CT scan receive a dose of radiation in the same range as survivors of the Hiroshima bomb attacks who were less than a half mile from ground zero."  When I was going through my cancer treatment and follow-up care, I had at least nine nearly full body catscans. It is hard for me to breathe after reading that quote.

In effect, I was exposed to at least the same dosage of radiation as the Hiroshima survivors who were in a half mile range of the atom bomb detonation. My body experienced this radiation dosage not once, but at least nine times. My scans were not just to the chest, either, so the radiation exposure would be even higher.
So, you see, there is so much to do, and not enough time.

Posted by .Ecofeminist and Mothering Ruminations at 6:26 AM 0 comments 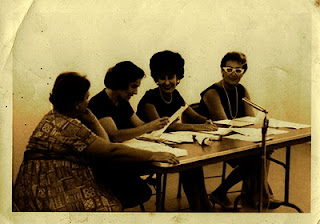 Women Strike For Peace members Phyllis Resnick, Shirley R. Hutner, and Thalia Stern Broudy, speaking at the Miami, Florida Peace Center about their trip to Washington D.C. to protest  above-ground nuclear bomb testing in the U.S.  Most of the women in WSP were mothers.  They acted out of concern for their children's health because of the spread of radiation nation and worldwide from nuclear bomb fallout.  In the mid- 1950s, Radioactive Strontium 90 was found in cow's milk and children's teeth and bones and this information set them off on a call to end nuclear bomb testing.
The heroic work of the members of Women Strike For Peace led to the Partial Nuclear Test Ban Treaty of 1963.
Unfortunately, they were unable to put an end to underground bomb testing, and the radiation poisoning continued (and continues) as it could not be fully contained below ground.
Posted by .Ecofeminist and Mothering Ruminations at 7:20 AM 0 comments