Why I'm Going to the Women's Congress For Future Generations and Why You Should, Too


Eighteen years ago, a year after my mother's death, almost to the day, I was diagnosed with cancer, Hodgkin's Disease.  When my mother passed, she had lymphoma.   Five years prior to my diagnosis, my Dad died, after a long battle with Melanoma.  It metastasized to his brain.

All that cancer so close to home was my wake up call.  I knew something was wrong, and I knew it couldn't just be genetics.  Maybe the lymphoma was connected to Hodgkin's, but what had Melanoma to do with my cancer or with my mother's?  And, what about my maternal aunt, who had breast cancer?  What did those other cancers have to do with my Dad or me?  And all these folks had cancer in mid to later in life.  I was diagnosed at a fairly young age.

Suddenly, everyone else I knew seemed to be getting cancer, too. Neighbors. Children. Friends.

Maybe it all had to do with the poisoning of our environment.  Toxics and radiation?  This concern weighed heavily with me, nagging in the back of my mind as I went through the grueling 'healing' process of a cancer patient.

A few years later,  I became pregnant.  What joy!   All I wanted to was to become a mother.  I had waited for so long.

But, I wondered, right did I have to become a mother at all?  I felt guilty trying to become pregnant.  What might I pass on to my little one, and how could I protect her from all the environmental hazards in our polluted world? What dangers coursed in my veins?

I knew that my ability to protect my baby daughter was limited.  Sure, I did some substantial cleanses post Chemo, ate as well as I possibly could during the pregnancy (as well as before and after), used non-toxic products on my body and in my home, but no matter how much I did and do as an individual, given the boundariless nature of pollution--my maternal blood would still carry toxins right through the placenta and into her growing fetal body, and my breast milk would transmit pollutants as well after the birth, and after birth, well, it's a polluted world we live in, and none of us can fully keep the pollution out.  Sandra Steingraber documents all this in painful detail in her book, Having Faith.  Or watch her film, Living Downstream and listen to Sandra as she holds up a cup of human breast milk and explains the high number of toxins in that precious liquid.

Of course the more I learned, the more I learned.  After my study of toxics, I learned about the perils of global warming, mountaintop removal and fracking, overfishing and ocean pollution, sacrifice zones, radioactive waste (for which we have means of safe storage while it remains lethal for hundreds of thousands of years), radioactive accidents and leaks and many bomb "test" explosions, vast species extinction, genetically modified food, mono-cropping, the horrors of the meat industry, and more.

So began my journey, from eighteenth-century English professor, to obsessive environmental cancer-survivor mother sleuth and, eventually, to full-time environmentalist and activist.  There was no turning back.  The realization that my own daughter's safety and health-- and all children's health---was and is in peril, scared me mightily.

Now, my days and nights are spent writing, talking and teaching about, and marching for, environmental causes-- the rights of future generations.

The future generations--and I'm talking about more than humans here--deserve to live as they have since the beginning of time.  Rivers.  Trees.  Mountains.  Deserts.  Oceans.  The many species.

These are basic civil rights.

Yes, these are basic rights, and yet our children and all beings, present and future, are denied such rights.

My initial questioning post cancer and during early motherhood lead me to read the work of Rachel Carson, Sandra Steingraber, Helen Caldicott, Alice Stewart, Petra Kelly, Winona LaDuke, Vandana Shiva, Wangari Maathi, Joanna Macy, and Carolyn Merchant among other women environmentalists, scientists, historians, activists, and writers.  A common call for all of these remarkable women is a concern for the safety and health of children and the future generations.

For some reason, it seems to be women who understand in larger numbers than men, how dangerous things are for our children and the generations to come, how precariously things hang in the balance.

Oh, we've got our environmental male heroes-Henry David Thoreau, John Muir, Wendell Berry, Bill McKibben, Josh Fox, Robert Bullard, Paul Hawkin, and more, no question about that, but look around the kitchen tables of environmental activism--it's mostly women.  Women Strike For Peace was a band of housewives and mothers, for example.  In Japan right now, post-Fukushima, environmental activists are predominantly moms tearfully screaming before stone-faced male politicians.  In Japan, in general, men talk about jobs, economics, and energy, while the women talk about radioactive food and water, cancer, and children's enlarged thyroid glands.

In my mind, environmental destruction and the exploitation of nature are rooted in patriarchal capitalist ideology. I'm suggesting, along with numerous other eco-feminists, that patriarchal capitalist ideology drives war, violence, the domination of women, people of color, the poor, as well as the degradation and destruction of our environment. It's all interconnected.  Patriarchal ideology is a system of  'power over' others, profit above health and safety.  Domination and exploitation are validated in such an ideology. Might equals right.

For those of you who don't believe all men are greedy, selfish, or oppressive, I completely agree: they are not.  Nor are all women nurturing caretakers who put environmental care and the good of the community before profit.

I'm talking about systemic patriarchal domination, not the behavior of individual men or women. I'm talking about a patriarchal culture and discourse--a larger language and world view.  So far, in the US and most industrialized countries, partriarchal capitalism is the dominant and accepted way of thinking and it has been since the rise of industrialism four hundred years ago.

Still, I'm convinced that it doesn't have to be or stay this way.  I'm an optimist!  Violence and domination, including violence against and exploitation of the environment, like racism and sexism, are learned behaviors.  That is why, in my classes, I talk about sexism, racism, and environmental exploitation as socio-political and cultural constructions.  If modes of domination are constructed and learned, then they can be deconstructed and unlearned.

That's why I'm going to the The Women's Congress For Future Generations on Sept 27-30th, in Moab, UT. 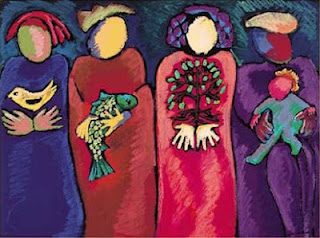 My goal in participating in The Women's Congress is to help co-create a safe present and future home for all living beings.

We will work to uncover an all-species language and way of understanding to help humans shift away from a mode of exploitation and domination to a moral ethic of equity, care, and mutuality among and for all beings.

We want to leave a safe home for the future ones.  That is our dream.

We plan to bring this ethic of guardianship back into our many home communities, spreading the seeds of ecological equity, care and protection into world cultures at large.

We hope this will be the first meeting of many, and the beginning of large-scale political, social, and ecological change.

Join us in Moab, Utah and meet with women and men (yes, men, too!) of so many varied gifts, backgrounds, colors, cultures, ages, talents, languages and abilities, to co-create an ecological vision of sacred protectorship of the future generations.

We will craft a Declaration of the Rights of Future Generations and the Responsibilities of Present Generations through art, song, word, meditation, vision, and performance.

We will forge a vision of ecological civil rights.

We will be joined by people of varied skills, wisdom, experience, and talents, including elders such as Joanna Macy and Mona Polacco, young activists from Peaceful Uprising, and environmental legal talents such as Carolyn Raffensperger.

I must be there.  What other choice is there?  Won't you come, too?

For more moving stories about the upcoming Women's Congress, see this piece in Spirituality in Health, Celia Alario's blog in SH, Rebecca Altman's writing about the Congress in ODEWIRE, as well as Carolyn Raffensperger's story at SEHN.

Posted by .Ecofeminist and Mothering Ruminations at 1:18 PM

Heidi - I would be at the Women's Congress in a heart beat if I could. Shoulder surgery is keeping me home in Montana for a while.

I must be a generation older than you but relate totally. Your article in Yes magazine was very well said and spoke to me directly.

Since my last post I tore my shoulder and so my blog has gone silent while I regain the use of both hands.

Blessings at the Congress!

Sorry to miss you there, Deborah. We will be writing about it and there will be future events I hope you will be able to attend. Heal speedily!

I read your article "A Mothers’ Movement for Future Generations" in Nation of Change E-Magazine. There are legions of good people like you who are changing the world, one kind act at a time. That is why I feel so positive about our future, even though things seem so glum. But there are hidden forces that need to be uncovered before we can fight to change them. Eisenhower called them the military-industrial complex. JFK spoke of secret societies. You can listen to part of that speech on YouTube - John F Kennedy last WARNING speech to the WORLD.

This small group these presidents warned of has expanded to include Big Oil, Big Pharma, Big Agra and Food Production, Big Gov't, Big Banks, etc. and seems to have control over every area of our lives. Unchecked capitalism has given us corporate power mongers who suffer from the disease of greed, and it is slowly killing all of us. The deeper you look, the easier it becomes to put the dots together. Telling people about what you've discovered is risky, however, because they have been trained to yell "conspiracy theory" instead of thinking for themselves, or they don't want to face the horror of it.

If you are still reading, let me share with you a wonderful book I found after my mother died of lymphoma. It's called Cancer - Step Outside the Box by Ty Bollinger. The author discusses many alternative therapies that are far superior to Big Medicine's chemicals and radiation. There are inexpensive cures with NO negative side effects. Each of my mother's chemo treatments was $12,000. She was scheduled to have six of them. Cancer is big business, so of course these alternative therapies are suppressed and hidden, and the doctors who provide them are harassed and threatened with having their medical license pulled because it might overturn the cancer cash cow.

There is much to learn if you have the courage and willingness to investigate. We must, or there will be no future, but we must also actively nurture our joy, happiness, awe and wonder and inspiration. Imagine how you wish the future to be, with enough of everything for everyone, pure air and soil, clean water and healthy foods, harmony and balance, and the opportunity for humanity to reach its potential.