This morning, when driving my daughter to a play rehearsal, we heard a Martin Luther King rap song on WBAI. My daughter smiled a big one.

King’s voice rang out, surrounded by powerful beats and drums.

“I remember hearing those words live on TV,” I told my daughter.

His words still ring true—the plight of African Americans in this country remains an unfair and terribly hard one.

Then, she asked me about my experiences with King and Civil Rights growing up.

“Didn’t your parents do Civil Rights actions?” She asked.

“Yes, when I was just a baby and toddler, my mom and her friends took us to the courthouse in downtown Miami. In the late 1950s and early sixties. They made us drink from the ‘negroes only’ water fountain. That stunned the white folks who worked there! How shocking for them to see a group of little white kids and babies in strollers, all lined up to get a drink of water from the ‘negroes only’ fountain.”

“And, you know the story about the Freedom Riders who came down south from up north, blacks and whites who road deep into the south to protest the Jim Crow laws and racial oppression? Well, around this time, a similar group called CNVA (Committee for NonViolent Action) came to Miami. They stayed with my parents and their friends in the early sixties. The did Civil Rights work with local African American ministers. Meetings were held at our houses, money was raised. We took rides in their 'Spirit of Freedom' boat-–the boat that CNVA tried to take to Cuba during the Cuban Missile Crisis. Of course CNVA was stopped before they got anywhere near Cuba—but my parents and their friends marched in support of this voyage--across the bridge in heavy rain in Miami Beach, while the 'Spirit of Freedom' group attempted to boat to Cuba. After, their boat was confiscated.”

“Neighbors called us Reds, and the FBI watched very closely—lodging themselves outside of our houses. All these upper-middle class Jews (doctors, lawyers, dentists) in their houses in Miami Beach and Miami! What a time it was.”

I also told my daughter about how my mom and dad refused to go into any restaurant or hotel that my Caribbean nanny, Margie, couldn’t eat or sleep in. We just saw the movie, The Help. I told my daughter it was like that back then for real. She’s seen The Long Walk Home, which I also show in my classes on feminist mothering. The Long Walk Home –it’s one of my very favorites on this theme, along with Corinna, Corinna.

It was a different time.

It was a different time, but not different enough.

Case in point: today, as we drove past the lower income part of my town, and police checked each car for updated registration, they let me pass with just a wave. My car registration, in fact, is out of date; I'd forgotten to put the new one in. When one policeman caught this and asked about it, I explained that the new one was at home. He said, "I trust you. Go on." A white woman in a nice car. What if I had been a woman of color? Would he do the same thing? Would he trust me then?

“Why are they over here, stopping cars, mom?” My daughter asked.

For the very reason Mr. Luther King, the Freedom Riders, Rosa Parks, and so many others risked their lives, I tell my daughter.

Thank you, Dr. King. Yet words of thank you do not justice to what you are owed.

I would like to say things are all better now--that our world is color blind-- but in far too many ways, racial discrimination abounds. Count up percentages of inequity today, just as you did then in your speech: who fill our prisons, who die (most) on death row, who attend the most poorly rated public schools, who earn the lowest wages, who live in the (most) contaminated areas, who have the highest rates of infant mortality, and who die (most) from curable diseases?

I miss you very much, Dr. Martin Luther King.

We still need you. 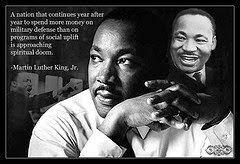 Photo Courtesy of seavisioneternelly at Flcker.
Posted by .Ecofeminist and Mothering Ruminations at 11:02 AM