The highlight of my Stony Brook Sustainability Studies Program environmental literature course this summer session was our weekend at Clearwater's Great Hudson Revival.

For those of you who don't know,  The Clearwater Revival is the brainchild of Pete Seeger, the musical 'clean water hero', who has been working to clean up the Hudson river from PCB contamination for many years. He also contributed significantly to the creation of the Clean Water Act.  Pete's Clearwater organization has been doing great environmental work for 40 years.  The Clearwater Revival Festival  functions as a fundraising, educational, and community building event to support the organization's work, and boy does it succeed on all counts.

To recap about my summer course: we read literature with environmental themes--two novels, nonfiction essays, and poetry by celebrated nature poets. We study our current environmental crises at large as well.

But we do a lot more than that.

We connect with nature,  meet with various environmental experts, and gain direct learning experience in the physical world.  This is not a class of or for avatars. 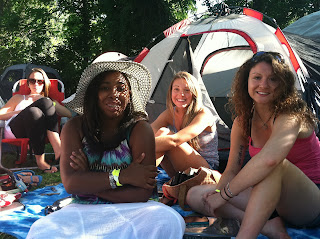 You get the point: you can't study environmental literature without learning about and engaging with the environmental crises we face today.

So off we went to Clearwater Revival.


Clearwater Revival takes place each year during Father's Day Weekend at the Croton Point Park on the Hudson, in Croton, NY.  The pristine park offers a stunning view of the river and the dramatic green and hilly landscape on the other side of the river.  Hiking trails and quiet places to ramble or contemplate abound.

Music rings out all day and night from tents scattered throughout the park.  This is the music of social and political justice, equal rights and freedom for all genders, colors, ethnicities, and sexual persuasions.   From Holly Near, Tom Chapin & family, to Arlo Guthrie and songs by Woody Guthrie, it's a progressive musical lover's fantasy.  There is much dancing, too.

The Clearwater Sloop floats in the distance on the Hudson--watching over, giving its blessing.

My students and I came as volunteers, so we camped, ate, and worked together  in a 'zero waste' community.

There were over one thousand volunteers, and many more thousands of guests, but the festival never felt crowded, noisy or unpleasant in any way.

A feeling of calm and peace pervaded the air.

When we first arrived late Friday afternoon, we set up tents, sat in a circle, and shared our writings about the novel we are currently reading--All Over Creation by Ruth Ozeki.  We had a great discussion about various characters, and the issue of race and hybridity in the novel  (the main character is white and of Japanese descent) and mono-cropping and destruction of agriculture through industrial farming.  That led us into what is happening to American agriculture, and food and animal rights and waste,  and what we would be eating and producing this weekend.  Who would eat meat or not and why?  What impact would that make?  And, by the way, did everyone bring their own eating and drinking utensils as Clearwater recommended?

Yes, we all brought our own eating and drinking utensils.

After our afternoon meeting, we hiked down to the center of things and met our energetic leaders at the Environmental Action tent for  The Green Cities Initiative. Things really got going early the next morning on opening day at the Environmental Action Tent. At 8:00 a.m., Manna Jo Greene, Victor-Pierre Melendez, Karla Raimundi, and Ryan Palmer each explained, in depth, all of the environmental issues that the Green Cities Initiative covers.  They gave some of the best lectures on environmentalism I've ever heard.  We huddled in our new volunteer
t-shirts, drank hot coffee and listened. 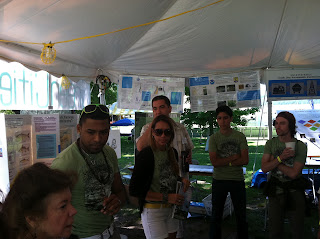 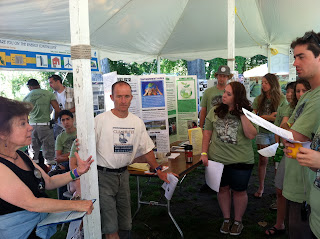 Manna Jo explained that the job of my students and the other volunteers would be for them to get signatures on petitions for the various environmental issues.  But the most important part of the petitioning, Manna stated, wasn't the acquiring of signatures, it was the 'conversation' that would happen between the student petitioners and the general public.  In other words, the students needed to engage with festival goers directly--to communicate with them about environmental issues.

Thank goodness the lectures by Manna, Victor, Karla, and Ryan were so superb.  The tent was filled with documentation on each topic as well.  Students quickly learned what they needed to know (we studied much of this in advance, but the tent lectures cemented their knowledge).

Talking to hundreds of festival goers gave my students a tremendous sense of confidence and empowerment.  They came back from their adventures beaming and amazed at the discussions they had, things they learned.  The got hundreds of signatures each on the petitions. 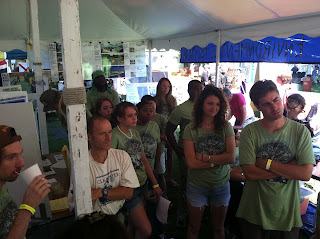 The take away statements from my class:

"Clearwater was a life-changing experience."

"I felt like I made such a difference.  I want to back to Clearwater Festival every year!"


Saturday night volunteer musical gatherings and dancing took place until the wee hours in the campgrounds.

Looking back at the weekend, it is clear that we became a family under the environmental tent.

Students learned first hand what it means to teach others about why taking care of our planet matters.  They met hundreds of people from all walks of life who are committed to taking care of the earth and other people. 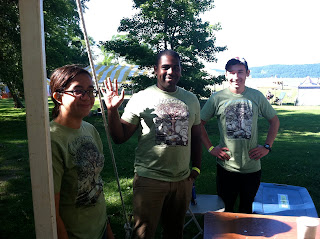 For others, it was their first encounter with professional environmentalism and activism--they came to understand how it all works.

Many students took advantage of the opportunity to explore furture career options with our Environmental Action mentors:  Karla, an environmental justice lawyer and Victor, who runs the Green Cities Initiative and holds a Masters in Sustainability, and Manna Jo, who works at the forefront of Clearwater's environmental actions, as well as Ryan, the Green Cities Project Coordinator.

It was a magical weekend.

This is how education, activism, community and love come into being.

For me, as a child of the sixties, and a daughter of  civil rights, peace and anti-nuclear activists who brought me to rallies and Pete Seeger concerts regularly as a kid----this was/is my circle game.

Before Revival, as I said, none of my students heard of Pete Seeger, Clearwater, or his historical connections to the Clean Water Act and the preservation/restoration of the Hudson.

Now they want to go back to Clearwater every year.


It took a bit of work to make this weekend happen--lots of phone calls, emails, and pestering on my part.

It really wasn't so hard to pull off.

Once I heard Victor's dynamic voice on the phone, I knew magic would happen.

Thank you Pete, and thank you Clearwater.  Thank you Victor, Karla, Manna, and Ryan.  Thank you Linda Richards, our passionate head of all the volunteers!  Your raucous warm greeting started the weekend off on the right foot, and your support (all those 1,050 volunteers!)  made it all possible.

This little light of mine, I'm going to let it shine.

See you next year, at Revival! 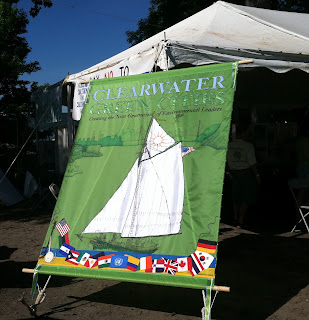 Posted by .Ecofeminist and Mothering Ruminations at 2:32 PM