Civil Disobedience and Love: Sandra Steingraber Puts Her Body On the Line 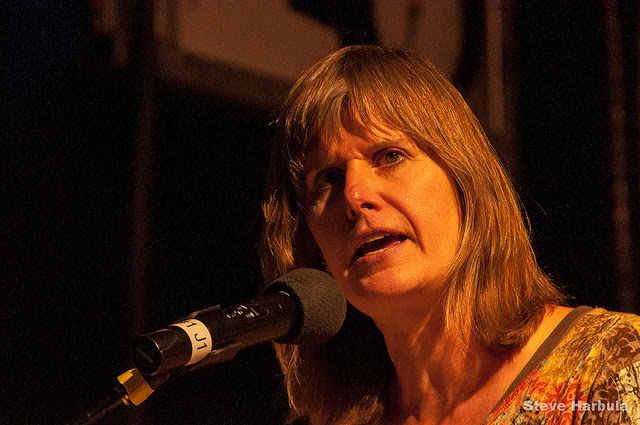 Imagine what we mothers could do if we brought that spirit of loud, uncompromising, creative defiance to the necessary project of dismantling the fossil fuel industry and emancipating renewable energy, which is its hostage? Imagine hundreds and hundreds of mothers peacefully blockading the infrastructure projects of the fossil fuel industry, day after day. Imagine us, all unafraid, filling jails across the land. Imagine the press conferences we would give upon our release. Imagine us living up to our children’s belief in us as superheroes. —Sandra Steingraber
On April 24, Sandra Steingraber completed her 15-day prison sentence for “acting out” peacefully against the violation of our bodies and the earth by corporate polluters and environmental exploiters—in this case, the gas and hydro-fracking industry.
Sandra is my hero.
Sandra, like me, is a mother, cancer survivor, writer and activist. Her books, Living Downstream,Raising Elijah and Having Faith  contribute greatly to my thinking, writing and teaching.
Like Sandra, I know firsthand how the polluting of this planet causes unnecessary and horrific suffering for present and future beings.  And, like Sandra, I am frustrated about how little has changed for the better over the years, despite copious evidence she and other scientists have compiled that points to the links between toxic pollution and cancer, neurological disorders,asthma and other disease. A myriad of health problems such as these and others abound from the lack of environmental regulations in the U.S.  Also, like Sandra, as a mother, I worry about what the future holds in these environmentally degraded times for all children present and future. These days, protecting our children takes on a whole new meaning. So much is out of our control, and the stakes are crazy.
Every day, citizens breath, eat, drink and encounter toxic materials without their knowledge, consent or will. We need a Safe Chemicals Act, among other things. We’re in the midst of a climate crisis that’s spiraling out of control and scientific predictions are dire. We’re running out of clean water. We’ve got tons of radioactive waste that lasts for thousands of years, and no safe place exists so far to store these hazardous materials. Pollinating insects are vanishing. Crucial sea life is beingdestroyed. “Even life itself seems to be running out,” Michael Moyer and Carrie Stors write inScientific American, “as biologists warn that we are in the midst of a global extinction event comparable to the throes of dinosaurs.” Things are bad, really bad, and future generations will bear a terrible burden for our hubris, negligence and greed.
From writing and speaking to civil action: What led Sandra to land in jail? I think that like a lot of us moms and cancer survivors who work on these issues, she’s had it. Unlike many (or most, I should say), however, Sandra truly has the courage of her convictions.
In recent years, gas companies began plans to drill, or hydro-frack, in upstate New York near Sandra’s  home. As a biologist, she researched what fracking upstate would mean for her community and beyond. Sandra decided to take the gas industry on directly, so she’s been marching, speaking, stumping, testifying, campaigning, writing and doing everything in her power to stop fracking from taking place in New York. Steingraber even gave away her $100,000 Teresa Heinz prize to New York State anti-fracking groups.  Instead of putting this money into a college fund for her kids, she gave the award away to save the earth and all of our children. “This is my kids’ college fund,” she told me. “The earth we live on.”
So when Inergy Storage and Transportation planned to use Seneca Lake, located near her home, as a dump for fracking waste (propane, butane and methane), Sandra put her body on the line.  She and others performed a peaceful act of civil disobedience by ‘blockading’ the gate of Inergy’s gas compressor facility on the lake.
Sandra was arrested for trespassing.
At her sentencing, Sandra said to the judge: “In my field of environmental health, the word trespass has meaning. Toxic trespass refers to involuntary human exposure to a chemical or other pollutant. It is a contamination without consent … It is my belief, as a biologist, that Inergy is guilty of toxic trespass.”
While in prison, Sandra wrote a series of powerful letters to the world about her act of civil disobedience.  She wrote and drew upon the tradition of Thoreau, Gandhi, Parks and King. You cannot read her letters without being deeply moved.
In her final letter from jail, Sandra calls on all mothers to join her in a movement of environmental civil disobedience. We are in an “environmental crisis” she writes, that “requires our urgent attention. And by attention, I mean sustained political action, not intermittent, private worrying.” We are running out of time. If we really care about our children’s future, instead of carting our kids to soccer games and SAT prep classes, we need to participate in a “civil-rights … uprising.”
I cannot stop reading and rereading this extraordinary letter. I cannot stop imagining speaking face-to-face with Sandra and saying, “tell me precisely what to do and I’ll do it.”
Sandra provides compelling reasons to follow her call.  She’s singing out for a peaceful, creative and joyful mother’s revolution.  It happened before and it worked: They were the mothers of Women Strike For Peace (my own mom was one of them) and they helped stop above-ground nuclear test bombing in the U.S. in 1963. I believe we will do it again.
Welcome Home, Sandra Steingraber.
We stand with you.
We hear you.
You will prevail.
Crossposted from Ms. Magazine Blog.
Photo of Sandra Steingraber courtesy of Flickr user SteveHarbula under Creative Commons 2.0.
Posted by .Ecofeminist and Mothering Ruminations at 7:47 AM

I was referred to your blog by the Ms. article on "Fracking as Toxic Trespass." Your blog is compelling, and I would love to talk to you some more about some of the psychological, emotional, and relational effects of environmental contamination. If you are interested in learning more about me, you can visit my website http://systemicimpacts.wordpress.com/

Forgive me for the "work in progress" appearance.