I am concerned about Indian Point Nuclear Power plant.

It's so easy to forget. It's easy to worry about my daughter, who has some kind of sinus infection; she keeps coughing; she has finals; we're worried about college admissions. There are dishes to wash. There is laundry to fold. There are papers to grade.

It's so easy to forget. I know there is an abundance of unsafely stored spent fuel there--sitting in overcrowded pools, more fuel rods than the pools were designed to hold, and the longer the reactors run, the more spent fuel there will be. I don't think people know about the spent fuel issue and storage. They just stay, "Oh dear, Yucca Mountain didn't work out because of politics." They don't think, "How in the heck would one even get all the spent fuel from all over the U.S. safely TO Yucca Mountain?" That's "IF" Yucca Mountain were safe for containing nuclear waste, which it's not (geological studies show us this), and there's no other plan at the moment for long-term safe storage of nuke waste. Meanwhile, there is forty years' worth of nuclear waste stored at Indian Point and twenty million lives at risk. They are expecting earthquakes--7 on the Richter Scale (Columbia University Study) and the plant is not built to withstand such seismic activity.

It's easy to forget. I wake up and think, "I must do something." The day gets busy.  Driving. Work. Teaching. Meetings.  Just the other day there was a transformer fire there. It was in the news.  It barely got anyone's attention.

It's so easy to forget. Yet I think of Japan. My friends in Japan can't understand why New Yorkers are not afraid. They look at me with pity in their eyes and ask, "What are you all doing about Indian Point? Don't you realize how much danger you are in!"  Nobody thought Fukushima would blow. Well, a few did. Mostly women. They tried to alert the government, they worked hard to reduce the amount of MOX fuel used (a plutonium mix) in the reactors. But nobody expected a Tsunami and Earthquake to cause three core meltdowns.

It's so easy to forget. Oh New York City. Nothing is meant to last. I could take a Buddhist approach.  Maybe Americans are really Buddhists, after all. Nothing matters to us. It's all Samsara. That irks me. Perhaps nothing lasts, but the massive suffering we cause with our hubris and greed is not acceptable.

It's so easy to forget. They are going to run a new high pressure and potentially explosive natural gas line approximately 1500 feet from reactors 2 and 3 and only several hundred feet from the spent fuel rods.* I should do something. What? What? Protest FERC. FERC approved this pipeline. People I know are protesting. Artists and parents and citizens are rising.

It's so easy to forget. The nuke plant seems far away. Nothing happened at Three Mile Island, that's the chant. Fukushima isn't so bad. Nothing much happened at Chernobyl. Secrets and Lies. Amnesia and cover ups. So many other spills and leaks and accidents that have few have heard of. It's hard to imagine such a disaster happening here. It's spring. The birds are singing. A nuclear nun was just released from two years in prison for protesting at Oak Ridge. What's Oak Ridge you might ask?  We can't smell or taste radiation, so maybe it's a science fiction story. Maybe ionizing radiation doesn't exist at all. Maybe cancer is a dream. Maybe children with leukemia don't exist.

It's so very, very easy to forget.

My head explodes with fear when I remember.

If you'd like to remember and learn, read these two important articles by Ellen Cantrow and Alison Rose Levy.

Or, speak up at the May 20th Nuclear Regulatory Commission meeting. 6:30 in Tarrytown, NY. Make your voice heard. Keep in mind: We don't even need Indian Point (it only produces 5% of NYC's electricity) and the Governor of New York has said the plant (on its own) poses such a great safety risk that it should be shut down.**

Or, get involved with SAPE (see below). They are working hard to stop the Algonquin/Spectra gas pipeline that threatens millions of lives. They need your help. 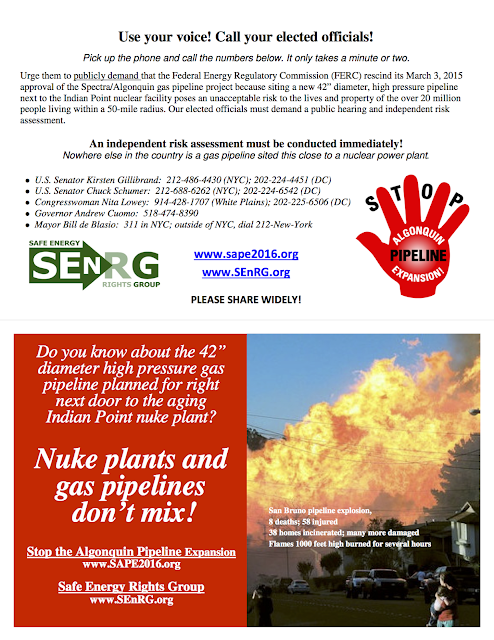 -----
*The newly approved 42" diameter high pressure gas pipeline will run 105 feet from vital structures at Indian Point e.g. jet fuel tank and switch yard.
The pipeline will be located several hundred feet from 40 years of spent fuel rods, and about 1500 feet from Reactors 2 and 3.
**We don't need IP for electricity in New York, even though Entergy claims we do. NYC gets about 5% of its electricity from the plant and the rest is sold elsewhere.

Posted by .Ecofeminist and Mothering Ruminations at 6:21 AM