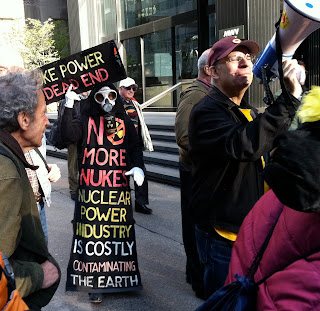 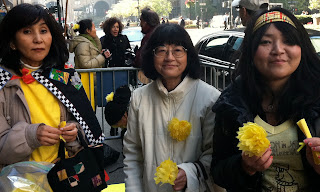 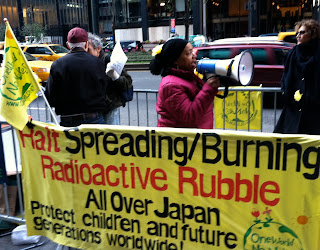 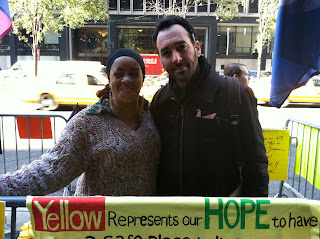 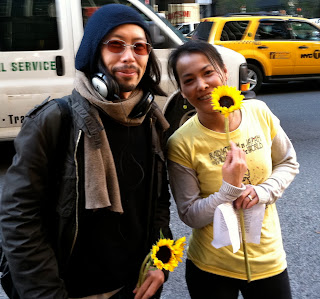 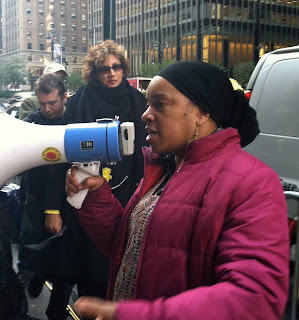 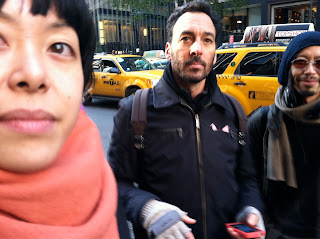 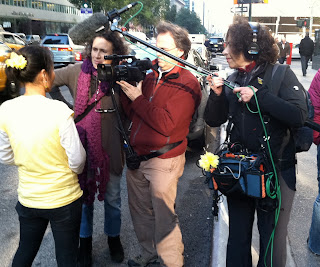 Oh the things we can do.  I stood there with a bull horn on the streets of NYC saying that the children of Fukushima need to be evacuated and the transporting, burning and dumping of contaminated waste into Tokyo Bay must be halted.  I've never imagined doing such a thing before, but it sure felt right.  Right on the steps of the Japanese Consulate!

Tomoi Zeimer, Priscilla Star and I went up to the offices of the Japanese consulate on 49th and Park, but they would only listen to us in the hallway. Two male "robots" as Tomoi called them, stared at us while we read the petition to stop spreading the contaminated rubble.  Then I launched in on why the children need to be evacuated beyond the twelve mile limit and how children are so much more vulnerable to getting cancer than men --and the standard by which "acceeptable" levels are determined are based on adult male bodies.  What craziness.  A fetus is far more susceptible and vulnerable to the dangers of radiation than a grown man.  Who thinks these things up?  I'm no medical genius, but these pregnant women and little kids and babies must be protected... Seems more than obvious.

Well, the Japanese male robots who work for the consulate just stood there.  They were expressionless.  They would have let us speak for hours.  I don't even know if they speak English.  They uttered no words.

A Japanese news station filmed us.  Bianca Jagger has delivered her petition in London.  Kim Roberson is delivering the petition in San Francisco on Nov. 7  at the Japanese Consulate, 50 Fremont St., San Francisco, at 9:30 am.  A bunch of people all over the world are doing the same.  You can see a short film of our afternoon here:

Here is a great video of the Japanese women who are protesting right now for their children in Tokyo.  There are sit-ins and peaceful protests taking place.  Watch here:

Breaking News:  This just in From Kim Roberson who delivered the petition today in San Francisco:

Hi everyone,
Sorry for the delay but I was sending our press release to the AP desk here in SF and following up with more info to the news station who filmed us this morning.  I am assured that they will cover the story tonight on the news, and possibly a further story soon.  Hopefully the AP will pick this up as a national story since FFAN was hard at work today on both coasts, with one group in SF presenting Tomoi's petition, plus Diane D'Arrigo and Cindy Foulkers presenting letters to Senator Feinstein and Boxer's top aides during meetings in DC.  This happened almost simulataneously, PLUS Tomoi was being interviewed on local radio here.  It felt synergistic for sure, in a good way!
Some details of our meeting, Tomoi your petition was presented this morning to Mr Iwata, Consul at the Japanese Consulate office.  The experience was one that none of us here will ever forget.  Mr. Iwata was very cordial and invited us into a room which had three men lining one wall and one man sitting next to him.  Present also were activists Leslie de Taillandie, activist and author Cecile Pineda, activist and artist Kafre James, activist and artist Rachel Gertrude Johnson, activist and filmmaker Marybeth Brangan and yours truly were all present (Jim Heddle interviewed us all however was not given a pass into the meeting).  I'll write in more detail soon of the actual exchanges but suffice to say that Mr. Iwata at one point had to force back tears as he spoke of his grandfather who, at 92, survived the earthquake however died in the tsunami.  Rachel printed the petition in beautiful blue parchment paper and tied with a string and two yellow rose buds. We also delivered 18 yellow roses and 10 large sunflowers.  We conveyed our condolences but were also firm in telling Mr. Iwata that the incineration will prove to be disasterous.  He told us that he will contact the Tokyo office to convey our concerns.
My son is pretty active right now, need to go, but hope at least that this at least gives you an idea of our day.
take care,
Kim

Mama power!
Posted by .Ecofeminist and Mothering Ruminations at 11:40 AM