Benefit for the Women's Anti-Nuclear Movement in Japan

A Benefit for the Women's Anti-Nuclear Movement in Japan

After 9 months, the ongoing nuclear crisis in Fukushima continues to haunt the lives of the people in Japan. Every day, reports indicate high levels of radioactivity in Northeast Japan, including the Tokyo Metropolis. The Japanese government is still withholding information, while failing to provide logistical and financial support for the people who need to move out of the area. Out of the 300,000 children in the Fukushima area, only 3,000 have been evacuated. Kids are still playing in schoolyards that are highly contaminated. People are trapped, and forced to live with radiation without knowing the consequences for their health or the possible effects on their bodies.

In the U.S., however, much of the information has ceased to come to public attention and been almost forgotten after the initial shock of the disaster, when many of us “prayed for” Japan's recovery. In the meantime, radioactive rain has contaminated the people and the land. There is no return to normalcy in Japan.

In this ongoing struggle, women are standing up to oppose the Japanese government’s suicidal logic. In particular, mothers have bravely organized counteractions against the authorities who are abandoning children to be irradiated. They have staged countless demonstrations, both in the form of street action and in the form of negotiation with government officials, in order to protect the lives of children.

As a feminist art collective, Permenent Wave is going to host a benefit event to support women's efforts and learn about the situation that we don't see in the media. The event will feature The Suzan, an all-female rock band from Japan, as well as local female-fronted groups. There will be a special holiday bake sale and speakers who will talk about the current movement in Japan, and the feminist issues within. The proceeds from this event will be sent to a DIY-group Human Recovery Project in Tokyo, a group of musicians and activists who have been working in support of the people in the affected area. 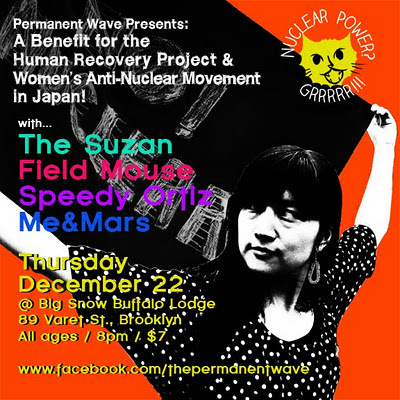 Posted by .Ecofeminist and Mothering Ruminations at 5:25 AM